What it’s morphed into will blow your mind. 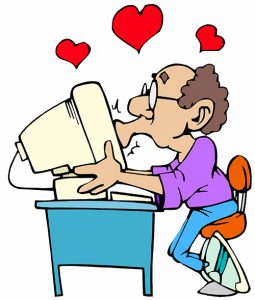 Online dating, or originally media dating, has been around for hundreds of years. The online dating scene really took off at the turn of the 21st century.  It became the place to find love when you were too busy or sick of the club scene.  It was a place where real people gathered for immediacy of dating and long term commitments.  It was the first time we had massive choice.

No one had to leave their homes until it was time to meet that special someone.

What it has morphed into is a lying, deceitful, deviate, socially-needy, companionship-leery customer base.  It is not usually pretty and not usually respectful.

When it first began, it was great, just as we envisioned it, filled with people who wanted a real relationship, willing to accept real people.  Now, it’s littered, nay, filled with degenerates and  scammers.

Yes, the online dating trend has begun to sour.  It seems to have run its course and feels like your at a bar that you’ve gone to for years and it’s like 1:30 in the morning, getting ready for last call and all you see is a sea of the same-old-faces.

No longer is the thrill of new people and possibilities of a lasting final love, no, now it’s more a thought of, “should I waste my time”, “is your profile picture recent”.

Gone are the days of trust of photos, ages and careers.  It is now more plausible that the photo is 15 years old, their age is 10 years older and their career is long over, now on a fixed-income.

Be careful, be aware and know the signs of a psycho or a scammer because the online dating trend for the over has begun to sour.

Tags:dating
Previous : MY LOVE, MY LOVE – a love poem
Next : THE TOP 5 BEST VALENTINE’S DAY GIFTS FOR YOUR 55 PLUS LOVE