ALONE FOR THE HOLIDAYS

Most people will be happy and pleased and share dinners and conversation and gifts, but I will not. Now, don’t feel sorry for me. Okay, feel a little sorry for me. This holiday, just like the last one will be without, Mother. God, I miss her.

We used to have such fun. I’d come over and Mother and her husband would be so excited to see me, as if they hadn’t seen me in years, although it had been just last week. And, bless their little souls, our little dogs would run in their wonderful garden and play and sneeze and get tired. We would all have the most delightful time, most of the time.

Admittedly, I would like to take back the holiday dinner for which I never showed up. I was so stupidly angry.

You see, I wanted it at my house; which was my Mother’s husband’s family home, and Mother wanted it at her place, a lovely hillside home with a view of the city and mountains.

I told her I wanted to cook, she said cook here.

That wasn’t good enough. I told her I wanted a different dessert. She said okay.

That still wasn’t good enough, because I wanted the pie from a different pie maker. I told her I wanted different side dishes and that was it.she said, “come or don’t!”. She also said it made no difference to her, but that Christmas was coming with or without me!

Well, I never showed up.

Gee, I wish I hadn’t done that. I really don’t know why I was so angry.

My Mother and I and her husband have, used to have, dinner together twice a week. Mother and would also have hair appointments, every Tuesday; mine first, then Mother’s. And always, always, we’d then have lunch afterwards. It was delightful.

I‘d call her four, maybe six times a day. And sometimes when she wouldn’t answer, I’d call the neighbors who would go to her door to check up on her.

She did have the very best neighbors. There was this one couple who moved in, sweet as newlyweds, and they adored my Mother and her husband. This sweet young couple would always help. On two occasions Mother called them instead of an ambulance to take her husband to the hospital due to heart attack.

These two were always there for them. They’d bring a small tree for us to decorate, hang a wreath on the door, and wrap garland all around Mother’s mailbox; she loved that the most! Every year Mother would order up a tall goodie box from Harry and David’s for them.

Do you know this couple was so pleased, you would think Mother ordered them something from Tiffany’s. Their grace was infectious.

One time, Mother had fallen and the sweet young couple, living up the hillside, saw Mother lying there. They called to her out the window and as Mother would tell it, “they flew like angels and lifted me into bed”. What happened was, they darted out their back door and ran down the hill, foregoing their hillside garden steps and mostly sliding! Then they called me and I was over within minutes. Mother rested and was fine, but she had fallen and couldn’t get up. It seems Mother had decided that day was a fine day to disinfect the storage refrigerator, and it was there that she fell.

So there she lay, looking like a scientist in a moo-moo with her industrial rubber gloves and her cleaning solvents. That was how her neighbors saw her lying there.

Mother told me wonderful stories about these wonderful neighbors. My neighborhood wasn’t so friendly, we all knew each other, but my neighborhood was on the decline and filled with rental properties, lower income folk and it seemed to be getting worse.

But after Mother’s husband passed on, we all became a little closer, even the neighbors. And when Mother passed a couple of years later, it would be my pleasure to call these neighbors, friends and my neighbors too.

I couldn’t stand the thought being without my Mother. So, I did the next best thing, I moved into her house.

In her house, she was everywhere. Her awards, her plaques, her crafty art, her dolls, her scent, her warmth. It was all still in the house. It was still Mother’s house. She found the land, she designed it, she had it built, all when she was 40. She tells a great story of saving her nylons from the men and then reselling them to the women at work, just to have enough money to build the house. It was wonderful house, perched in a lovely neighborhood on the brow of the mountain, by a lake.

It was after she built the house that she met her husband. A terrific man, younger than she, but just as artistic and talented.

I adored being in her house, being blanketed everyday by all that she made, had and planned to do.

And even though I missed her beyond words, and even though we fought more than not, I always had my Mother. We were always together.

Now that she has passed on, this will be my second Christmas without her. And although I am alone, I know I’m really not. I know Mother is here with me and always be.

Did I mention that the sweet neighbors had a baby? So they will be coming over. But this year, I asked to be alone for Christmas and I have invited them for New Year’s dinner. I’ll cook, and they’ll be bringing the pie from my favorite pie shoppe. 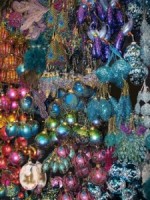