READING HURTS MY NECK OR Technology may be ruining your posture

AND WHAT TO DO ABOUT IT

The rise of computer technology has undoubtedly given everyone a new lease on life however it’s also given an awful lot of us a lot of neck and back pain.

A new study from the University of Nevada has found that “iPad neck” is a growing health concern and that women were almost three times more likely to experience musculoskeletal problems compared to men. Given that the effects of ageing including discs in our vertebrae drying out, and the wear and tear of osteoarthritis can also exacerbate problems, experts are urging people to become more aware of their body positions when operating devices. 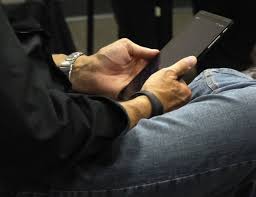 The study surveyed 412 people about the effects of hunching over their devices including e-book readers. The most frequently reported symptoms were stiffness, soreness, or aching pain in the neck, upper back/ shoulder, arms/ hands, or head. Most people (55 per cent) reported moderate discomfort, but 10 per cent said their symptoms were severe and 15 per cent said it affected their sleep.

Sitting without back support increased the odds of pain by over two times as did sitting with the device in one’s lap and sitting in a chair with a tablet on a flat surface. Some 70 per cent of women reported painful symptoms compared to just 30 per cent of men. Women were also much more likely to use devices whilst sitting on the floor (77 per cent) compared to 23 per cent of men. It’s thought that women’s lower muscle strength, shorter arms and narrower shoulders can lead to more extreme neck and shoulder positions whilst typing.

Another recent study by San Francisco State University monitored the effects of looking at upright computers and posture. Researchers asked 125 students to scrunch their necks and jut their heads forward when looking at a computer for 30 seconds. A huge 98 per cent reported some level of pain in their head, neck or eyes afterwards.

Skeletal therapist Dell-Maree Day, who runs online posture training program The Invisible Exercise (TIE), says most people’s muscles and bones are already out of alignment due to incorrect posture, in part due to looking down at devices.

“People really need to be aware of how damaging this is for your overall health, especially as we’re working longer and more dependent on  these machines,” she says. “If you are working at your computer, especially if it’s a laptop, try to elevate it so your eyes rest on the top third of the screen.

“Always try to look straight ahead wherever possible so your neck is straight and your jaw is not tilted forward,” she says. “Make sure your jaw is not too close to your throat and not too far away. When in resting mode, your facial and neck muscles should always be relaxed and not clenched. Looking straight ahead prevents your jowls from falling forward and strengthens your neck muscles. With iPads, try to view them lying down flat on your back, and use a special iPad pillow to prop them up.”

Stretches
Dr Luca Moutafian from Complete Care Chiropractic says if you do encounter pain, then try the following exercises for relief and as an additional preventative measure:

Neck stretch
Sit, stand or lie on you back with arms at your sides. Side bend-(laterally flex) the head to one side and tip the ear to the opposite shoulder in a pain free range of movement. With the opposite hand, slowly begin shrugging (lifting the shoulder towards the ear) and hold for 15 seconds then lower the shoulder to the floor. Repeat the exact same neck exercise on the opposite side. It’s best to try and do 2 sets of 15 seconds each side at least twice each day but there’s really no real sensible limit so it can be done as often as you can fit it in.

Cervical spine extension stretch
Sit, stand or lie on the floor with both arms stretched down by your side. Push both shoulders down. Tuck the chin into the chest. Extend the head back slightly while elevating the chin to the ceiling, still keeping the arms down and back. Hold that position for 15 seconds then rest for 30 seconds and repeat.

Trapezius and neck stretch
Extend the shoulders down back slightly. Grasp the wrist of the arm on the side to be stretched with the other hand. Turn the head toward side of the neck to be stretched and tilt the head away (ear to shoulder). Feel a stretch in the side of the neck. Hold the neck stretch for 20 seconds and repeat each side three times.

Previous : AGING SAFELY IN PLACE
Next : HOW TO MAKE EASY AND DELICIOUS RIBS ON THE BBQ GRILL