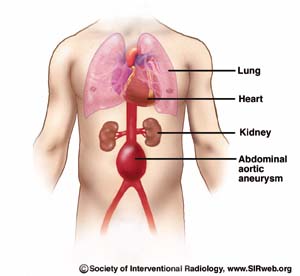 Each year, more than 20,000 people in the United States are affected by a life-threatening thoracic aortic aneurysm (TAA).  Although TAAs are less common than other diseases like heart attacks or diabetes, they can prove to be just as dangerous.  Fortunately, if detected early, TAAs can be treated, or even cured, with new treatment options that help patients to ensure a longer, fuller and more active lifestyle.

TAA is a disease that occurs when the walls of the descending thoracic aorta, the body’s largest blood vessel, weaken and expand.  Also known as the “silent killer,” a TAA often presents no symptoms to its victims, but poses an extremely serious health risk.  TAAs can burst or rupture, causing internal bleeding which can lead to shock or death.  TAAs most commonly strike men and women between the age of 60 and 70, and the incidence of disease increases dramatically with age.  Those who smoke, have high blood pressure, high cholesterol, and a family history of heart disease are particularly at risk for the disease.

Nonetheless, there are ways to detect a TAA and treat it before it bursts or ruptures.

Most often, TAAs can be found during medical tests such as a CT scan, ultrasound or angiogram.  These simple exams are non-invasive and can be done on an outpatient basis.  The exams enable doctors to tell how big the aneurysm is – the key element in determining whether or not treatment is needed.

If a TAA is small and not causing symptoms, a physician may recommend watchful waiting or a continuous monitoring for signs of changes in the aneurysm size.  If the TAA is large and causing symptoms, it is important to speak with a vascular surgeon to determine the appropriate course of action.  Despite which course of action best suits the patient, it is extremely important to schedule regular health check ups to prevent this potentially fatal disease from attacking.

Until recently, open surgery had been the most common form of repairing TAAs; a major operation with a long recovery time that could not be tolerated by the elderly.  A less-invasive alternative, Thoracic Endovascular Aortic Repair (TEVAR), is now available, helping patients with severe aneurysms live a longer, fuller life.

TEVAR surgery is performed inside the thoracic region of the aorta using thin, long tubes called catheters.  Through small incisions in the groin, the catheters are used to guide and deliver a stent-graft that expands to channel blood through the aorta and reduce the pressure on the aneurysmal sac.  The recovery time for endovascular repair is usually much shorter than with open surgery, cutting hospital stays down to two to three days.

TAA is a serious disease that, if not caught and treated early, could prove to be life-threatening.  Today the growing use of TEVAR is helping to spur a rising survival rate of TAA patients and a dramatic reduction in the trauma and lengthy recovery times associated with open surgery.  As millions of Americans reach an age that places them at risk of the disease, it is essential to obtain regular screenings and recognize the vascular health resources available for the detection and treatment of the disease.

Phil Nowell is Global Director of the Aortic Intervention Strategic Business Unit for Cook Medical, a world leader in devices to treat aortic aneurysms. He can be reached at info@cookmedical.com.

Previous : IT’S ALL IN YOUR MIND, REFRAME YOUR BRAIN!
Next : FINALLY! Magazine The Premier Magazine Just for Me! 55plus! Generation X, Baby Boomer! Their families and their caregivers!