More than 15 WWII and Korean War Veterans or their spouses from Spring Hills Cherry Hill Assisted Living, in New Jersey, received a Veteran’s Medal before Veteran’s Day. These men and women received the Camden County Military Service Medal or the Korean War Service Medal. In addition to the medal presentation.  The ceremony included a WWII Veteran and resident reciting the Pledge of Allegiance, Taps was played “live”, on the trumpet, and the singing of God Bless America. After the ceremony, there was a reception with a light lunch. 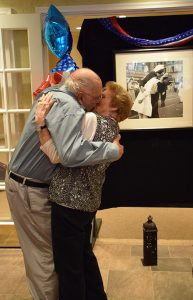 Tags:veterans
Previous : THANKFUL, AND THAT’S HOW IT ALL BEGAN…
Next : FINALLY! MAGAZINE The Premier Magazine Just For You! Gen X magazine, Baby boomers, Senior Citizens